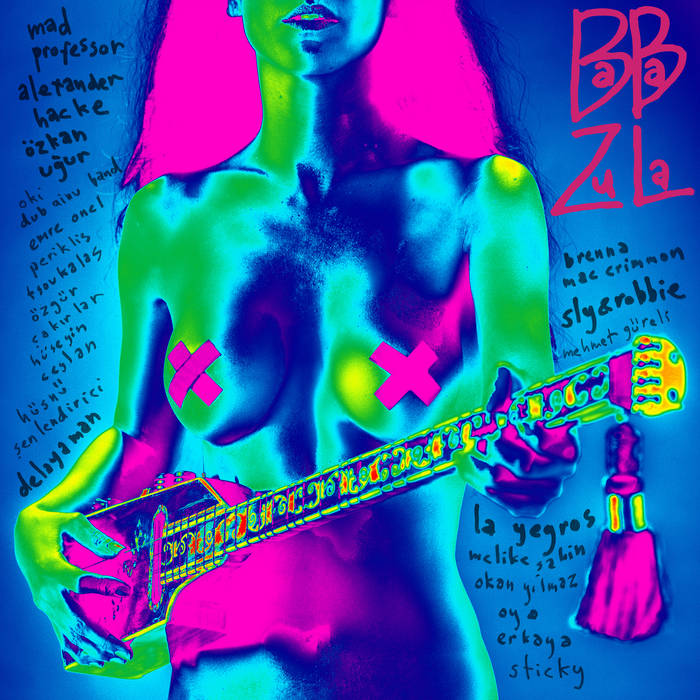 Carsten Pieper Glitterbeat is running a 5th birthday special these days, so I thought I should finally grab some of the items from my wishlist. Could have bought so much more, great stuff from all over the world, but as I got so much new music in the last days I had to force back the urge to get more ;-)

This one is kind of a career overview from Turkey's psychedelic heroes. An amazing yourney.

~ DJ Megasoup aka Selaroda ~ Spectacular double album compilation from Turkey's finest modern band. So many great tracks, it's hard to pick just one. Love the bonus disc of Dub versions too!
more...

All too often these days, the world can feel like a dark and dangerous place. But music remains a light in the bleakness, offering a constant sense hope and joy and celebration. In Turkey the ominous shadows have been growing longer for several years but Baba Zula have been a shining beacon for 20 years, bringing the West and the Orient together in a glory of Istanbul psychedelia. To celebrate those two decades of existence, XX brings together tracks from across Baba Zula’s history, along with a second album of dubs created by artists like Mad Professor. Dr. Das of Asian Dub Foundation, and Dirtmusic.

“We wanted to have a compilation that was a little different,” explains group founder and electric saz player Osman Murat Ertel. “None of the pieces here are in their original forms. Instead, we picked remixes, re-recordings, collaborations, live tracks, all the possibilities, but none of these have been released before. And it’s a mix of recording techniques – digital, analogue, tape, mp3.”

Formed by Ertel and Levent Akman in 1996, Baba Zula took Turkish psychedelic pioneers of the 1960s like Moğollar as their inspiration and foundation for what they called Istanbul psychedelia, the fathers of a scene that’s since grown up around them.

“Those original bands of the ‘60s grew out of traditional Anatolian music,” Ertel says. “But the coups of the 1970s and ‘80s put an end to any experimentation. We picked up the reins to make music for the 21st century with electric instruments, effects, and machines, something contemporary and unique. I always tell people that they might not like us, but no one can say we’re not original!”

Baba Zula came into existence when Ertel’s previous outfit, ZeN, was asked to create a soundtrack by a director friend. Ertel and two other members were interested, and the band grew from that seed, with music for films very much a part of their output.

Since that small beginning, Baba Zula have played all over the world, won awards for their work in film and theatre, often been rewarded at the Turkish Billboard awards, and had their albums counted among the most prestigious ever released in Turkey. They’ve also built a global network of like-minded performers, experimental souls in all genres of music, working with people as varied as Turkish opera singer Semiha Berksoy, dub mixer Mad Professor, and Can drummer Jaki Liebzeit. And that, to Ertel, is one of the band’s great successes.
“It’s exciting to collaborate with people you listened to when you were young. It’s a great inspiration and a huge fulfilment in dreaming something and having it come true. And it becomes a link of friendship.”

Those links and the band’s deep and fascinating history are displayed in widescreen on XX. “Biz Size Aşik Olduk” (We Fell In Love With You), for instance, is the only song they’ve ever created for a television serial, one that catapulted them to popularity all across Turkey.
“I went to the market the day after it was shown,” Ertel recalls. “As soon as the girl at the cash desk knew who I was, she began singing it.”

But Baba Zula have always believed that music needs to make a powerful statement, and they’ve never pulled punches in their lyrics. On XX, both “Aşiklarin Sözü Kalir” (Eternal Is The Word Of Poets) and “Efkarli Yaprak” (Worried Leaf) make their points very eloquently.

“They’re both re-interpretations of songs we’ve released,” Ertel says. “They appeared on different albums, but we wanted to re-record them so they were closer to our live sound. The first is about how the words of the talking heads and politicians become meaningless so quickly, but what poets say resonate through the centuries. I wrote the second song for my uncle, who was a journalist. He and others fought with their pens and pencils, even though they were tortured and jailed. He died four years ago, and I composed this as a celebration of him.”

In typically perverse and playful fashion, although their biggest ‘hit’ – “Bir Sana Bir De Bana” (One For You And One For Me) – is here, it’s not the original Baba Zula version of the song, but one featuring a duet between an Armenian man and a French woman.

The disc closes with a pair of previously unreleased live tracks. “Çöl Aslanlari” (Desert Lions) was mixed by Einstürzende Neubaten’s Alexander Hacke, while “Abdülcanbaz” is taken from a performance at the Resistance Festival in Piraeus, Greece, with Ertel’s electric saz powering and pushing the group higher and higher over a swell of percussion, electric oud, effects, and vocals. They’re long, mesmeric cuts, the pulsing of an ancient Turkish soul in a very modern band.
“They’re very raw recordings,” Ertel agrees, “but they have power. A record made in the studio is very different to a concert. We’ve never put out a live album, so I wanted to show that side of us.”

And now, with 20 years behind them, what’s next for Baba Zula?
“I never thought it would last this long,” Ertel admits. “Maybe another 20 years is possible, maybe not. But living here in Turkey, I don’t know about the future. I hope the band could continue without me. We give our messages very carefully for those who can understand them. But I do know it’s important to carry on; you can be gone anytime.”

Featured sounds by K.Spark and WIZDUMB, plus Basi joins the show to discuss his latest release.